A bill that would extend business hours on the road for food trucks to two or three hours advanced today.

The City Council of Honolulu held its second public meeting today at Honolulu Hale at 1 p.m. If Bill 59 passes, it will amend the time limit of 15 minutes to two or three hours for vendors such as food trucks to solicit business on the roads.

Councilwoman Tulsi Gabbard introduced the bill several months ago to change the time limit regulated by a 1978 ordinance that requires vendors to move at least 300 feet after being at one location for 15 minutes. Violators can face a charge of up to 30 days in jail and up to a $1,000 fine.

“I think the intent of the bill, is a good one,” Gabbard said. 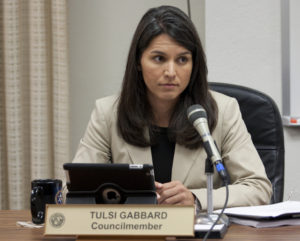 The first speaker at the meeting was Honolulu Police Department (HPD) Major Sean Naito. Naito said HPD does not support or oppose the bill. His main concern, however, is how HPD would enforce the bill if passed.

Cachola suggested an idea that instead of a two or three-hour time limit, a specified time zone could be implemented for breakfast, lunch and dinner times for vendors to follow.

Buffer zones were also brought up in the meeting regarding regulating the distance of a vendor from a brick-and-mortar establishment such as restaurants. The proposed range varies from between 500 feet to 100 feet.

Also present was Wayne Yoshioka, director of the Department of Transportation Services, who was involved in discussions regarding designated vendor zones, parking limits and the possibility of requiring another license for vendors to obtain to do business.

Roger Morey, executive director of the Hawaii Restaurant Association (HRA) testified in support of the bill, and said that the HRA recognizes food trucks as a legitimate restaurant.

Tiki Truck owner Abe Jazmin and Aloha Ice Cream Tricycle owner Kathy Sills were two out of a handful of people who were charged by HPD for violating Article 13, Section 15-13.6 – Selling on highways restricted.

“There is a sense of urgency with this bill passing as there are food truck owners in court testifying,” — Councilwoman Tulsi Gabbard in support of Bill 59

She also said the judge hopes to see the outcome of the bill before making a decision on any outstanding charges.

The third meeting will take place March 21, at the Honolulu Hale on the third floor starting at 10 a.m. The meeting is open for the public to attend.