The Howard Hughes Corporation today announced that this summer it will launch Courtyard Cinema, a new monthly film series in partnership with the Hawaii International Film Festival (HIFF) and Consolidated Theatres at Ward Village. Courtyard Cinema, free and open to the public, will showcase a selection of HIFF curated films on the second Thursday of each month and will also feature refreshments, activities and special guests centered around the theme of the selected film. 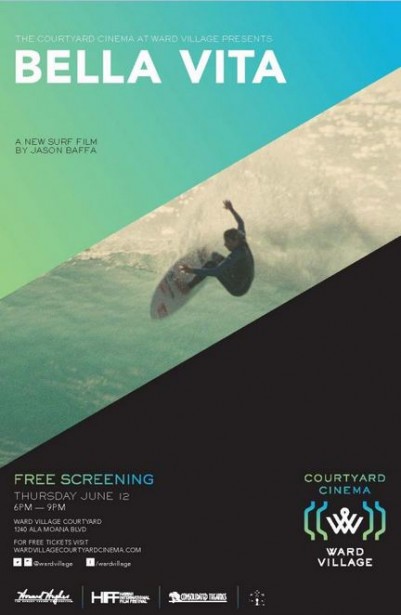 In collaboration with The Howard Hughes Corporation, HIFF has curated a broad range of films for Courtyard Cinema, from intellectually stimulating genre-bending works to family-oriented crowd favorites.

Courtyard Cinema premieres on Thursday, June 12 at 6 p.m. in the Ward Village Courtyard, located at 1240 Ala Moana Boulevard, with the Italian surf film, Bella Vita. Walking distance from some of the south shore's best waves, surf enthusiasts can enjoy an intimate and powerful journey that chronicles surfer, artist, and environmentalist Chris Del Moro on a pilgrimage back to his ancestral homeland in Italy captured in stunning 35mm. Renowned documentary filmmaker Jason Baffa will be in attendance to answer questions from the audience. For a preview of the film and more information, visit http://bellavitafilm.com/.

Want to score some free tickets? Visit www.wardvillagecourtyardcinema.com or on Facebook at Facebook.com/WardVillage for upcoming film selections and more details about the series.

In other Howard Hughes news, Ward Village broke ground on their Waiea condominium project this past Saturday, the first mixed-use residential tower at Ward Village.